On Monday, September 30th, at 12:30 CET, Jean-Claude Mignon announced at the Council of Europe in Strasbourg that Ales Bialiatski had been named the historic first laureate of the Václav Havel Award for Human Rights. 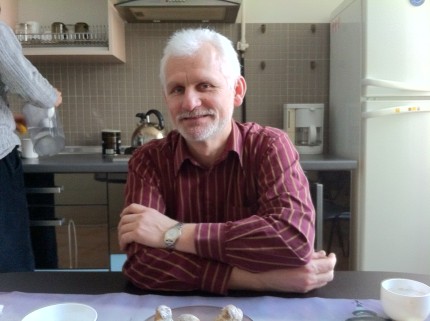 From the start of the 1980s, Ales Bialiatski, a young Belarusian writer and graduate of the Gomel University Faculty of History and Philology, joined the national democratic movement. While the world was still divided by the Iron Curtain, he became a founding member of the Belarusian Popular Front. Helping to create a young writers’ association that he chaired for several years, Ales went on to join the Belarusian Writers’ Union. Later, he organised the first demonstrations against totalitarianism.

This commitment led to his imprisonment in 1988, marking the start of a long series of arrests and harassment.

In 1996, in the face of the increasing repression of the Lukachenko regime, Ales Bialiatski created the Human Rights Centre Viasna. In 2007, just three years after joining International Federation for Human Rights (FIDH), Ales Bialiatski was elected its Vice-President, the first representative of the former Soviet countries to be elected to the FIDH International Board.

Civic society:
Freedom is not to be taken for granted

In honour of the first laureate of the Václav Havel Award for Human Rights, the Václav Havel Library was organised in cooperation with the Charter 77 Foundation a one-day conference entitled Civic Society: Freedom Is Not To Be Taken For Granted on Wednesday 2 October.

Václav Havel and his perspective on human rights issues. How is freedom defined and how we can protect it?

Acknowledging the work of non-profit and non-governmental institutions in the authoritarian and semi-authoritarian regimes or in the states infringing the human rights; currently facing increased pressure and worsen legal conditions for their work and pure existence.

How can mature democracies effectively pursue human rights protection outside its territories? What are the tools that are efficient? Do economic sanctions really work? Do we have legal tools available or do we rely on soft measures of solidarity expressions? Evaluation of the sanctions by the receivers.