The EU between Yesterday and Tomorrow 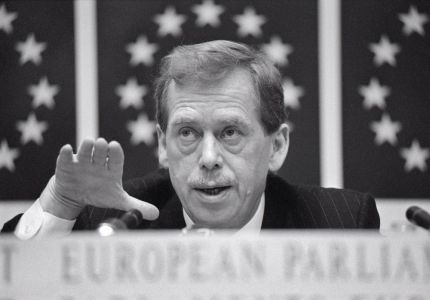 In the year of the 15th anniversary of our accession to the EU and just four days before important elections for the European Parliament, we want to share our thoughts about the performance of the Czech Republic in the EU and of the EU in the Czech Republic and in Central Europe, and also look towards the future especially through the eyes of young people whose lives will be influenced by the EU.

13.15–13.35 A performance by Bohdan Bláhovec on the theme of “The EU between Yesterday and Tomorrow”; musical accompaniment by Jakub Cermaque

In his address at the European Parliament back in 1994, Václav Havel said that having studied the Maastricht Treaty and other documents on which the EU is based, the appeal was to his reason, not to his heart. Prior to accession to the EU, a considerable part of the population was influenced by the euphoria from “returning to the West”. In the 2003 referendum, 77% of people voted for to join. Can we say now, 15 years later, that the citizens’ hearts burn for the EU? How are we experiencing European identity today? Isn’t it just a marriage of convenience, stripped of all emotion? Where can the EU’s positive ‘charisma’ be found, especially for young people?

In some respects, Central Europe has been living through the European identity crisis in recent years. Efforts appear to turn the wheel of the pro-western direction towards the East. What is causing this crisis, and how is it manifested in individual countries of the region? And how is the EU perceived by young active people who are engaged in civic life and are trying to struggle against the other direction? Could the approaching European elections indicate a positive turning point?

For young people, the EU is an obvious part of their life. How do they view it, and how do they see its future? How do they perceive the approaching European elections? Are they pro-European by rule of thumb? What can they do so that other countries do not follow the example of Great Britain? What specific steps and recommendations do young people have for the EU and their peers?

The whole conference will be simultaneously translated between English and Czech languages.