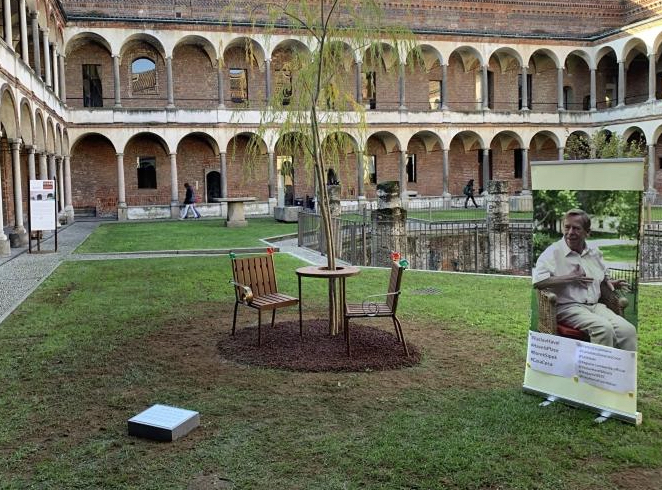 The 31st Václav Havel’s Place was ceremonially unveiled in the courtyard of the Legnaia state university in Milan on Wednesday 13 November 1989. Symbolically, it was inaugurated on the eve of the 30th anniversary of the start of the Velvet Revolution, which culminated in Václav Havel’s election as president of Czechoslovakia. Following an official introduction in the university’s grand interior, a ribbon in national colours was ceremonially cut in the courtyard of Milan’s 14th century university and the memorial entered university life.

The Václav Havel’s Place is a memorial dedicated to Václav Havel. It comprises two chairs linked by a round table with a tree growing through its centre. The installation of Havel’s Places is a worldwide project that was initiated by the Czech ambassador to the US, Petr Gandalovič, and the architect and designer Bořek Šípek. The aim of the project is to create a network of places in public spaces that can contribute to meeting and the holding of genuine dialogue – places where it will be possible to conduct discussions and to reflect in the spirit of Václav Havel’s ideals and philosophy.