Following the August occupation he warns against the resignation of society. In the autumn he gets involved in student strikes and studies and evaluates substantively a situation inexorably headed toward another totalitarian state. Like hundreds of other creative people, he is gradually excluded from official culture and becomes a banned author. In January 1969 he becomes involved in a polemic raised by Milan Kundera under the name the Czech Lot; that debate about the meaning of the Prague Spring and the conduct of society played out in arts magazines in 1968–1970. For his involvement in the Ten Points declaration, which rejected the policy of so-called normalisation, he is questioned and accused of preparing to commit the crime of sedition. The investigation is shelved. The dissent era begins.

He resides alternatively in Prague and at his cottage in Hrádeček near Trutnov, where for several years he undergoes a crisis as an author and is cut off from world culture. In Czechoslovakia his works are banned. He lives from royalties from his books and plays performed around the world (over 300 productions). His essays are translated and published in prestigious international newspapers. He becomes an internationally respected author and Hrádeček becomes a centre of the unofficial Czech culture and the human rights struggle.

He works as an unskilled labourer at the Trutnov Brewery, an experience he reflects on in Audience (1975), in which character of diffident dissident Ferdinand Vaněk makes his first appearance. Other "Vaněk plays" featuring the “unheroic hero” would later be composed not only by VH himself but also by dissident friends.

VH writes an open letter to Dr. Gustáv Husák, a critical analysis of normalization" which in reality means demoralization and the loss of human identity."

He sets up the samizdat Dispatch Editions, which circulates copies of texts by banned authors. The only attempt at a domestic production of one of Havel's plays, the premiere of The Beggar's Opera, an ironic parable about the symbiosis of the criminal underworld and worldly powers inspired by John Gay’s play, is staged by the Divadlo Na tahu amateur theatre company (directed by Andrej Krob) in Horní Počernice. Those involved, including audience members, are later fired from their jobs and persecuted. It is an event rich in symbolism and significant in the creation of a community of Czech dissidents.

Through Jiří Němec, a former colleague from Tvář magazine, VH becomes closer to the music and cultural underground, in particular the scene’s leader Ivan Martin Jirous (born 1944). When the band The Plastic People of the Universe is put on trial, he organizes protests in their support. In August he joins seven Czech writers and philosophers in writing a letter to the German author Heinrich Böll. In the context of the trial, a community develops that will later form the basis of Charter 77.

The single-act plays Audience and Unveiling are premiered at the Burgtheater in Vienna. Thanks to its director Achim Benning, a decade begins during which almost all of Havel's plays are staged, one by one, some of them in world premiere.

Publication of Charter 77, the manifesto of a movement demanding the observance of human rights in Czechoslovakia. The Charter unites several hundred activists of diverse ideological backgrounds - democrats, Christians, reform Communists and the underground. VH co-authors the text and becomes one of the Charter's three first spokespersons. He is arrested and held in custody from January to May. In October he receives a suspended sentence for “harming state interests abroad". Another spokesman, philosopher Jan Patočka (born 1907), who Havel is very close to, dies from exhaustion following police interrogations.

VH together with other signatories of Charter 77 founds the Committee for the Defence of the Unjustly Prosecuted (VONS). It monitored and drew attention to the cases of those who were prosecuted contrary to the then laws of Czechoslovakia.

VH attends the first joint meeting of the representatives of the Polish Committee for Social Self-defence (KOR) and Charter 77, held on the Czechoslovak-Polish border. At the second meeting in September, he co-signs the Joint Letter to human rights activists in Eastern Europe, signed by 21 participants in the meeting. A third meeting, planned for October, is thwarted by Czechoslovak and Polish police.

VH writes his best-known essay The Power of the Powerless, an analysis of the current condition of and prospects for political dissent and a text about ceasing to “live a lie" and attempting to "live in truth".

VH is under house arrest for six months. From December 1978 the secret police monitor the staircase of his home in Prague. They also build a special sentry box facing Hrádeček that is nicknamed Lunochod. From May 1979 he and 11 other VONS members are arrested.

While in custody Havel receives an offer of a one-year stay in New York, in other words an offer to emigrate. He refuses as long as other political prisoners are not also released, therefore losing the chance to get out. In prison he writes letters to his wife that become a series of philosophical essays addressing ethics, responsibility and relationship with God. Friends piece together the collection Letters to Olga (Dopisy Olze), which comes to be regarded as a key expression of Havel's philosophy and is soon translated into a number of world languages.

Trial of members of the Committee for the Defence of the Unjustly Prosecuted. VH is sentenced to four and a half years without parole for subversion. Similar verdicts are handed down to VONS activists Petr Uhl, Jiří Dienstbier, Otta Bednářová, Václav Benda, Dana Němcová and others.

International support for VH grows, especially in artistic circles. Theatres and television channels show a stage reconstruction of his trial. In the summer of 1982, A Night for Václav Havel is put on at the Avignon Theatre festival, the company at Vienna’s Burgtheatre organises a petition in his support and several Western politicians speak up for him. He receives honorary doctorates from the University of Toronto and from the University of Toulouse-Le Mirail.

Suspension of prison sentence for health reasons. He fights for his life due to a severe case of pneumonia. In part thanks to broad international solidarity, he is released for home treatment.

He writes the play Largo Desolato, the story of a dissident, intellectual and moral leader of the nation who fights for his identity with his last drops of strength.

Collections of Havel's essays On Human Identity and In all Directions, edited by Vilém Prečan, are published by Czech exiles. VH gives a number of interviews to prestigious Western newspapers and magazines. He speaks out in defence of the unjustly prosecuted and takes care of their financial support; he continues writing plays and publishing the samizdat Dispatch Editions; he is a member of the editorial board of Lidové noviny and co-founds the magazine O divadle (On Theatre). Though monitored, detained and harassed at home, abroad he is increasingly regarded as an unofficial authority within the Czech dissent.

A house search takes place at his cottage in Hrádeček, during which the police confiscate a great number of books, magazines, audio tapes, photos, personal letters and other documents. VH is also subjected to harassment from the police in subsequent years.

VH writes the play Temptation, an ironic variation on the Faust myth given a modern setting. The focus here too is a deal with the devil and a struggle with his own conscience, which the protagonist in the end loses.

VH finishes the book Disturbing the Peace, an authobiographical interview with journalist Karel Hvížďala that is an attempt to sum up his life at the age of 50.

Thanks to friends, VH makes his first public appearances in 19 years at a folk festival in Lipnice nad Sázavou. Then on 10 December when he gives a speech on Prague's Škroupovo square at the first (and only) legally permitted demonstration in support of Human Rights Day. Throughout the year, VH attends meetings with foreign politicians and diplomats (including among others French President François Mitterrand) as part of the Charter 77 movement.

During a week-long series of protests commemorating the self-immolation of Jan Palach (dubbed Palach Week), he is taken into custody and sentenced to nine months without probation. Supporters circulate a petition in his defense, which is also signed by numerous artists active in the official culture. The border between official and alternative cultures begins to dissolve. A campaign is initiated to award VH the Nobel Peace Prize. In May he is released on parole. Immediately afterwards, he initiates a petition for the democratization of Czechoslovak society, A Few Sentences, which is signed by tens of thousands. In October he is arrested once again – this time for only a few days. The regime is visibly collapsing. 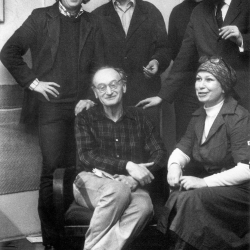 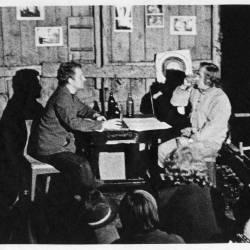 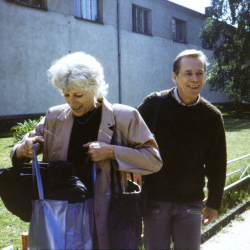 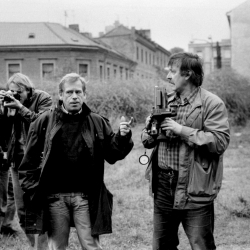 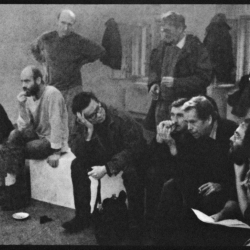 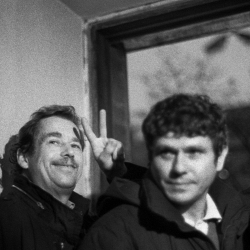 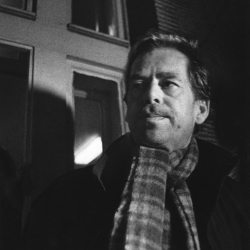 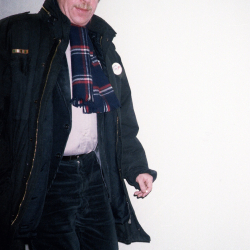 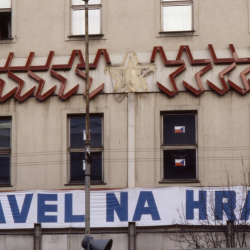