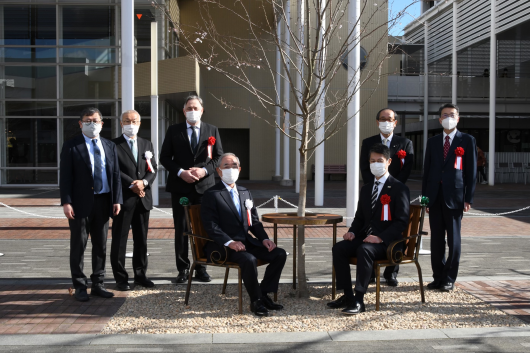 The ceremony follows this year's 85th anniversary of Václav Havel's birth as well as the 10th anniversary since the news of his departure hit the whole world. The ceremony was attended by the Ambassador of the Czech Republic to Japan, Mr. Martin Tomčo, the Governor of Hiroshima Prefecture, Mr. Hidehiko Yuzaki, the Mayor of Hiroshima, Mr. Kazumi Matsui, the Chief Director of the European Department of the Ministry of Foreign Affairs of Japan, Mr. Hideki Uyama, the President of Shudo Gakuen, Mr. Masao Hayashi, and the President of Hiroshima Shudo University, Mr. Takanori Mikami.

Guests of the ceremony had a unique chance to attend two lectures on the topic of Václav Havel, which were prepared especially for this occasion. The speakers were the acclaimed Japanologist Ms. Daniela Ryugo and the prominent professor of Bohemistics Mr. Taku Shinohara, who both work at Tokyo University of Foreign Studies. The event also featured a successful panel presentation prepared by the Czech Embassy in Japan to mark the 100th anniversary of diplomatic relations between the two countries.

​The Václav Havel’s Place was ceremonially unveiled at the newly opened University of Pardubice campus. “This form of memorial is a good symbol of essence of the personality of Václav Havel, who had a rare gift for listening to others and creating a pleasant atmosphere for meetings, debates and reflections,” said Anna Freimanová of the Václav Havel Library.