History of the prize

The Prize is awarded in memory of Václav Havel, playwright, opponent of totalitarianism, architect of the Velvet Revolution of 1989, President of Czechoslovakia and the Czech Republic and an enduring symbol of opposition to despotism. Nominations of any individual, non-governmental organisation or institution working to defend human rights are taken into consideration. The Prize consists of a sum of €60 000, a trophy and a diploma. 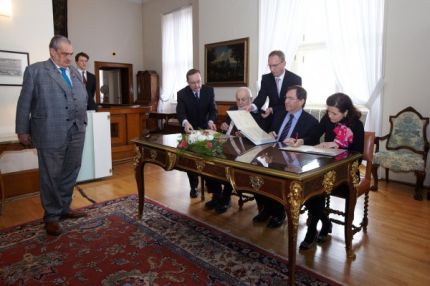 On 25 March 2013, the Václav Havel Human Rights Prize was launched at a ceremony in Prague with the signature of the Co-operation Agreement by the President of the Assembly, Jean-Claude Mignon, the Director of the Václav Havel Library, Marta Smolíková, and the Chair of the Steering Committee of the Charta 77 Foundation, František Janouch, in the presence of Czech Foreign Minister Karel Schwarzenberg.

The Václav Havel Human Rights Prize replaces the Council of Europe Parliamentary Assembly Human Rights Prize, which was created in 2007 and awarded every two years, 1st in 2009 to the NGO British Irish Human Rights Watch and then, in 2011, to the Russian NGO Committee against Torture. Detailed regulations for the Prize can be found at the following address.

Winners and finalists of the Prize