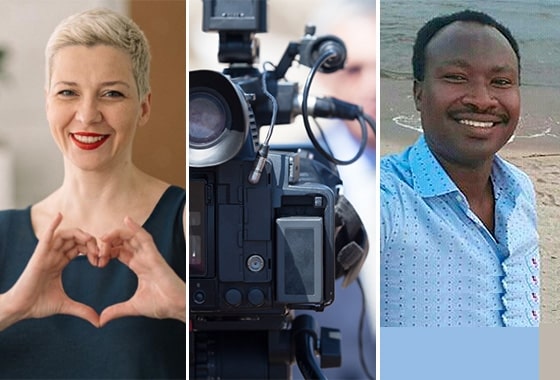 Ms Maria KALESNIKAVA, Belarus
The nominee is one of the opposition leaders in Belarus and a member of the Coordination Council. She was the head of the campaign headquarters of former presidential nominee Viktar Barbaryka. She is one of the three female symbols of the Belarusian opposition and its people’s struggle for civil and political liberties and fundamental rights. The nominee was abducted in Minsk in September 2020 and has been detained since then. She was charged with undermining national security. She tore her passport at the border to prevent being removed from Belarus. The nominee is at serious risk for her safety and life.

Reporters Sans Frontières
The nominee is a leading INGO that safeguards the freedom of expression and information. Since 1985, RSF has provided emergency support to thousands of journalists at risk around the world and obtained the release of several detained journalists. RSF systematically takes steps to ensure investigation and legal proceedings against those responsible of the murder of journalists and supports democracy by rolling back disinformation.

Mr Germain RUKUKI, Burundi
The nominee is a human rights defender who has been campaigning in the human rights field for years (in particular, against torture and the death penalty). Since 2015, human rights defenders and organisations in Burundi have been facing a shrinking space and have been targeted by the authorities. In this context, the nominee was sentenced in 2018 to 32 years in prison in what the international community considered to be a pretext to silence his voice and criminalise his human rights work. Subsequently, a Court of Appeal reduced his sentence to 1 year in 2021 and he was released.