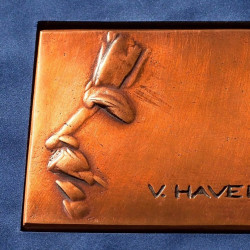 The selection panel of the Václav Havel Human Rights Prize, which rewards outstanding civil society action in the defence of human rights in Europe and beyond, has today announced the shortlist for the 2021 Prize.

Meeting today in Prague, the panel – made up of independent figures from the world of human rights and chaired by Rik Daems, President of the Parliamentary Assembly of the Council of Europe (PACE) – decided to shortlist the following three nominees, in alphabetical order:

* Ms Maria KALESNIKAVA, Belarus
The nominee is one of the opposition leaders in Belarus and a member of the Coordination Council. She was the head of the campaign headquarters of former presidential nominee Viktar Babaryka. She is one of the three female symbols of the Belarusian opposition and its people’s struggle for civil and political liberties and fundamental rights. The nominee was abducted in Minsk in September 2020 and has been detained since then. She was charged with undermining national security. She tore her passport at the border to prevent being removed from Belarus. The nominee is at serious risk for her safety and life.

* Reporters Sans Frontières
The nominee is a leading INGO that safeguards the freedom of expression and information. Since 1985, RSF has provided emergency support to thousands of journalists at risk around the world and obtained the release of several detained journalists. RSF systematically takes steps to ensure investigation and legal proceedings against those responsible of the murder of journalists and supports democracy by rolling back disinformation.

* For security reasons, the identity of the 3rd candidate will be revealed at a later stage.

“I would like to thank all those who put forward nominations for the 2021 Prize,” said PACE President Rik Daems. “Fundamental rights and freedoms must be defended and preserved with all necessary strength and vigilance. They can never be taken for granted and it takes a lot of courage and determination to uphold them. The three selected candidates´commitment to the values which were dear to Vaclav Havel and which the Council of Europe stands for deserves our appreciation and recognition”.

“In a situation when hundreds of millions of people are concerned primarily about their own health, human rights are jeopardized more than ever and deserve even greater attention. Human rights defenders are the heroes of our times,“ said Václav Havel Library Executive Director Michael Žantovský.

The Václav Havel Human Rights Prize is awarded each year by PACE, in partnership with the Václav Havel Library and the Charta 77 Foundation, and consists of a sum of 60,000 euros, a trophy and a diploma. The ceremony will be followed by the conference in honour of the prizewinner called The Covid Dilemmas: Rights against Responsibilities (with a special event on the human rights crisis in Afghanistan) in Prague on 29 September 2021.