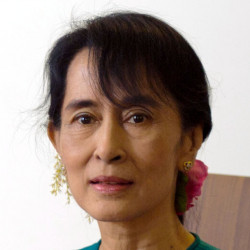 Dear Daw Aung San Suu Kyi, Please allow me to express my joy at your current visit  in your official capacity to the Czech Republic. I hope your talks in Prague will be enjoyable and productive. I am particularly pleased with your moving gesture to pay homage to Václav Havel, a long time supporter and admirer of yours, at his gravesite today. On a personal note, I will much enjoy the opportunity to renew, albeit briefly, our acquaintance after our meeting during the memorial evening in honour of Václav Havel at Naypyidaw in November 2016.

With a heavy heart, however, I have to admit that I am using this opportunity to appeal to you on behalf of the victims of continuing human rights violations in your country. For the last two years, we have been receiving reports of large scale atrocities in the Rakhine state during the Tatmadow operations there against the rebel Arakhan army. While acknowledging the right of a sovereign state to defend itself against insurrection and military incursions, it is the duty of such a state according to the international wartime and humanitarian law to protect the civilian population from arbitrary violence and to punish the perpetrators of war crimes. We are not convinced that your government exercises the due diligence in preventing such crimes and bringing the perpetrators to justice.

I have been equally disturbed by the news of the arrests and convictions of Wa Lone and Kyaw Soe Oo, nationals of Myanmar and reporters for the Reuters news agency, for allegedly threatening national security by reporting on the military operations of Tatmadow. As a former Reuters correspondent myself during the turbulent last months of the communist regime in Czechoslovakia, I am only too aware of the importance of objective and unbiased reporting, however uncomfortable for the authorities, from situations of conflict. I have noted with relief that the two reporters have now been released within the framework of an amnesty, and hope this also happened thanks to your leadership and your sense of justice. However, the many months that the reporters spent being interrogated and, after their sentencing, in jail, throw an unfavorable light on the freedom of press and expression in your beautiful country, and brought anguish and suffering to the two men and their families.

Last but not least, I was dismayed at the news of the arrest of Su Yadanar Myint and her young colleagues for taking part in the Thangyat performances recently, which allegedly constituted a threat to the national security by satirizing the military on the stage. You will no doubt understand that to criminalize artistic activities, in a theatrical setting no less, is contrary to everything that Václav Havel believed in and advocated in his life and for which he was willing to sacrifice his freedom just as you sacrificed your personal freedom to bring freedom and democracy to the people of Myanmar. In the spirit of his legacy, I therefore beseech you to intervene on behalf of the young performers and obtain their freedom as soon as possible.

Dear Daw Aung San Suu Kyi, my visit to Myanmar three years ago clearly demonstrated to me the complexities of your situation and the immensity of the task that you took on your shoulders. Unlike so many uninformed observers, I am in no rush to judge you by standards that took decades and centuries to prevail in our societies and I continue to believe in your good intentions and your sense of justice. However, I believe that as an icon of the human rights movement in recent history, as the Nobel Peace Prize laureate and as a soulmate and hero to Václav Havel, you have the responsibility to take a public stand for the values both of us believe in and to speak out against injustice, oppression and human rights violations in your country. I hope that you will accept my words in the spirit of love and sympathy, in which they have been written.

With the assurances of my highest consideration,