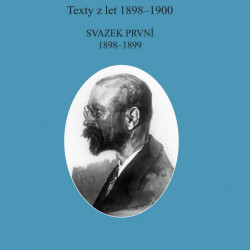 “I will not allow myself to be violated by anybody and I will not retreat in the face of lies and misunderstood slogans. Are thinking independently and working scientifically forbidden? My criticism of the Polná trial is the same scientific work as my other scientific work. The intelligentsia are those who think. Those who think also have an obligation against every injustice and must stand up and combat superstition in a thoroughgoing manner! Don’t lie! That would be the first law of a modern code of ethics. Not to lie to people but neither to lie to oneself. Let us not forget that he who lies to another lies to himself. He deceives himself in his imagination by allowing the lower instincts and feelings – unjustified, unconsidered, blind, unfelt.” (Masaryk 1899–1900)

The 24th edition of Works of TGM includes two volumes of Masaryk’s published works from 1898–1900 focused primarily on sociological, educational and political themes. More than 30 pieces document the author’s opposition to ritual superstition and anti-Semitism and his brave polemical stance during the so-called Hilsner Affair.

His focus was the issues of mass education, the relationship between journalism, the intelligentsia and the nature of the nation as a whole, the need for the orientation of the public and each “only slightly thinking person” and the effort to transform the Czech public sphere.

The presentation will be helmed by Marie Bahenská and Jan Zouhar while the chief editor of the Works of TGM Jiří Brabec and the publication’s editor Luboš Merhaut will also speak. Excerpts from Masaryk’s texts will be read.