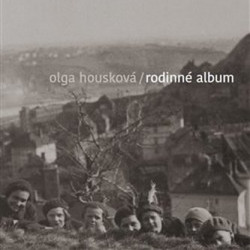 In short texts, photographic portraits and family snaps, the book Rodinné album (Family Album) maps the 20th century from the perspective of photographer Olga Housková (1919–2015), who together with her twin sister grew up in the milieu of the First Republic avant garde. Housková came of age in the circle surrounding the magazine Mladá kultura and during the war ran a photo studio with her sister where alongside children’s and portrait photography they were involved in the resistance and helped Jewish friends, many of whom died in concentration camps. She later worked for many years as the photographer at the Divadlo na Vinohrady theatre.

All of this is the subject of a succinct, even laconic, memoir and 120 photographs from the albums Housková created during her life.

Episodes from everyday life feature well-known names from her close circle, while major historical events are scarcely touched on.

Memoirs, memory, photography, the phenomenon of the family album and “big” history will be discussed by Vlasta Dufková, Anna Housková, Mariana Machová and Josef Moucha.

Táňa Fischerová will read excerpts from the book while Jan Šulc will moderate the event.