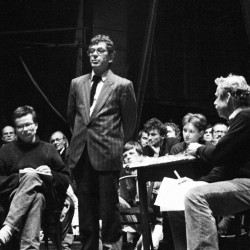 The Velvet Revolution began with a student march on Friday 17 November 1989. On the evening of Sunday 19 November, the Civic Forum was born at the Činoherní klub theatre. It led the revolution to victory and opened a new, democratic chapter in Czech history. Following a day of celebrations, marches and reminiscences, we will meet at the Činoherní klub on Sunday 17 November 2019 for an evening of period footage, recollections of participants in that fatal evening at the same venue 30 years earlier, music of that time and an examination of the raw reality of the present day. It’s guaranteed to be captivating, though the outcome is far from certain.

Among those due to speak are Martin Palouš, Edward Lucas, Timothy Garton Ash, Alexandr Vondra, Michael Žantovský and representatives of the groups Million Moments for Democracy, Národní Promenade and Festival of Freedom as well as other civic initiatives.