Is He Who Has Most Likes Right? 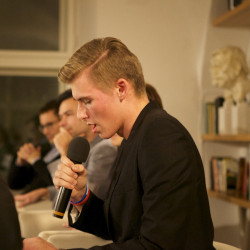 In 2017 Vaclav Havel Library received total 65 students´ essays. Participating students came from 33 Czech secondary schools located in 10 different regions of the Czech Republic. The topic of the competition in 2017 was: Is He Who Has Most Likes Right? In the essays students wrote about the impact of social networks on our lives, about the term „truth“ and a rising populism in the current society.

This year’s jury has been comprised of the following figures from Czech public life: