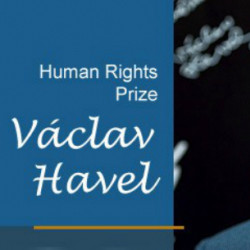 The theme will be the world migration phenomenon and its influence on the policies of European institutions, the governments of EU member states and public opinion.

The conference will be simultaneously interpreted into Czech and English. For a detailed programme and registration formula, go to: http://www.vaclavhavel-library.org/en/vh-prize/4-rocnik-ceny-2016

The Václav Havel Human Rights Prize has been bestowed annually since 2013 by the Parliamentary Assembly of the Council of Europe, the Václav Havel Library and the Charter 77 Foundation for extraordinary efforts in the defence of human rights and freedoms around the world. In 2015 it was awarded to Lyudmila Alexeyeva, a lifelong human rights campaigner.

The 2016 finalists were announced in Prague on 30 August:

Gordana Igrić (Serbia), journalist and human rights activist, founder of the Balkan Investigative Reporting Network (BIRN); currently its regional director, she is involved in the network’s educational programmes and oversees the majority of BIRN’s projects. Has earned numerous journalism awards for her work.

International Institute of Human Rights (France) / Institut international des droits de l'homme, IIDH (France), association based in Strasbourg established by René Cassin with the money from his 1968 Nobel Peace Prize. Active via education and research in the defence of human rights and freedoms. Its roughly 300 members comprise individuals and groups, including universities, researchers and human rights activists.

Nadia Murad Basee Taha (Iraq), a member of the Yazidi community who survived the massacre of her family and sexual slavery at the hands of IS jihadists. In December 2015 she delivered a speech at the UN Security Council on IS attacks on the Yazidis, calling for their international protection, the liberation of captives and the halting of the genocide and sexual slavery of Yazidi women.

The 2016 laureate will be announced at a ceremony in Strasbourg on 10 October.