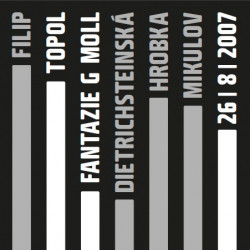 Remastered recording of a Filip Topol organ concert made at the Dietrichstein Tomb in Mikulovon 26 August 2007. Limited edition of 300 vinyl LPs with accompanying CD.

The 15th annual Eurotrialog Mikulov Festival of Unpopular Music took place in 2013 without Psí Vojáci.For the first time and unfortunately for good.A performance by them had been planned, along with, as in previous years, an organ concert by Filip at the Dietrichstein Tomb. In the end, however, the situation played out differently. Filip decided to head to Mexico in August and even bought a ticket. Definitely next year then, we agreed… But fate had different ideas and Filip will now never perform in Mikulov again.

Mikulov in the summer of 2006, when Psí Vojáci played in the setting sun and yellow light bathed the stage from one side, often comes back to me; the auditorium was engulfed in darkness and the audience didn’t make a sound. It sent a shiver down my spine. At such moments the festival acquired a higher meaning. And then the legendary Sunday concert at the Dietrichstein Tomb… Fans gathered on Mikulov’s square, two days of music, adventures, wine and a kind of reconciliation written on their faces and bodies.

From 2000 we ran a similar festival at Horní Planá in Šumava, Bigbítat Lipno. As well as a Psí Vojáci show, Filip would conduct readings there in the atrium of the home of Adalberet Stifterand perform organ concerts at a dilapidated little church in Dobrá Voda and later at the large Gothic Church of St. Margaret in Horní Planá. In 2002 it was emceed by Magor. A month ago one participant sent me these reminiscences of the event; I hope he won’t mind if I share an excerpt with you: “…I remember that Magor was in the vestry with a large shepherd’s staff and shouted: ‘Filip Topol, your Šumavans love you!’ The sacristan shouted that he was sloshed and they tried to bundle him out, shouting that it was the tabernacle of God. He roared: ‘Fuck the pope and the Vatican!’… and then promised that he’d behave himself… it really was fun. Mr. Hanzlík, remembering this has rather moved me. But I somehow had the need to share these facts with you, because you, I expect, weren’t just the manager of Psí Vojáci, but also their friend, above all Filip’s friend… I’m a long-time fan of the band and to me Filip Topol was a great musical maestro. You know, I once asked him to sign Karel Klenotník’s book Trip… He asked what should he write and I told him write, to a faithful listener. Then I open the book at home and there was: To František, his faithful musician Filip Topol. His sense of word play and poeticism… Yeah, that’s what I remember. I know there are loads of us… If there is any such thing as a musician’s Pure Land I hope he’s there, though I sometimes have the feeling there’s nothing after death… But as long as we’re alive, he’ll be with us…”

If memory serves, Filip played at most 10 organ concerts. However, only was recorded – the one you are listening to. It took place at Eurotrialog in 2007 and its “immortality” is thanks to Czech Radio editor Ivana Radechovská. Shortly before it started I asked Filip out of curiosity what he was actually going to play, as all we had said on the posters was “organ concert”. “I call it Fantasia in G minor,” he replied. Over 10 years Filip and I occasionally spoke about its possible release on CD but he always just waved his hand and said: “Yeah, yeah, there’s no hurry, some time…”

So Filip, that time has come.