Have We Learned Any Lessons? An article written by Martin Palouš and David J. Kramer 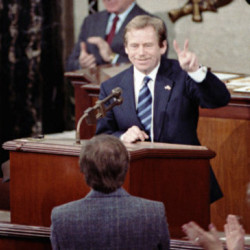 Thirty years ago, on February 21, 1990, the new president of Czechoslovakia addressed a joint session of the U.S. Congress in Washington, DC. Less than four months before, in a remarkable contrast to the position he had assumed as leader of his country, Vaclav Havel had been under arrest as a “subversive element” in his country under a Communist regime that was soon to come to a spectacular end. Continue reading here.