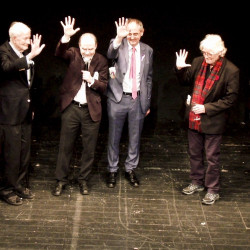 On 10 December 2019, Human Rights Day, the Vaclav Havel Library is launching a Facebook happening to support the protesters in Hong Kong. We call upon everyone to upload their photographs with their 5 fingers raised under this Facebook event.

On 17 November, the 30th anniversary of the beginning of the so-called Velvet Revolution in the former Czechoslovakia, at an event held at the Cinoherni klub theatre, Wendy and William Luers, Timothy Garton Ash, Paul Wilson, Edward Lucas and Michael Zantovsky declared their support for the five demands of the Hong Kong protesters:

The Vaclav Havel Library held one of the events commemorating the downfall of the totalitarian regime in the former Czechoslovakia at the Cinoherni klub theatre where the Citizens’ Forum was founded thirty years ago. The event was joined by some of the participants and witnesses of the so-called Velvet Revolution, members of the younger generation and foreign friends of Czechoslovakia, who raised their 5 fingers in symbolic support of the protesters in Hong Kong.