European Identity and its Czech Reflection 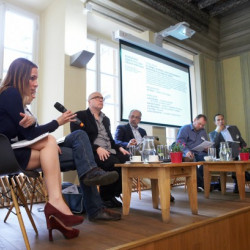 By means of four panel discussions – The Historical Roots of European Identity: Czechs and Europe; The Cultural Context of Europeanness: Core or Facade?; Europe as an Economic Space and Global Player?; and The European Union: Political Chimera, Project or Reality? – this one-day conference will explore the phenomenon of European identity in a Czech context.