The World-Altering Power of the Freedom of Speech 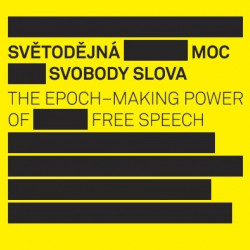 An international symposium on the role of freedom of expression in today’s globalised and culturally and religiously non-homogeneous international society.

Accompanying programme: Exhibitions created by the NGO People in Need, “Press Against Persecution – Cuban Samizdat 2000–2010” and “Silenced Voices: An Exhibition About Murdered Human Rights Activists in Russia”. Evening public meeting featuring participants in the symposium, moderated by Carl Gerschman, president of the National Endowment for Democracy, and Šimon Pánek of People in Need. Theatrical performance produced by Archa Theatre accompanied by the music of the All Star Refugee Band. Concert by the group The Plastic People of the Universe.

Organised by the Václav Havel Library in conjunction with People in Need and Archa Theatre.