What is the Three Seas Initiative? 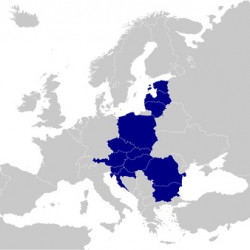 The Three Seas Initiative, a platform for international cooperation bringing together states between the Baltic, the Adriatic and the Black seas, was created in 2015. Poland and Croatia were there at its inception but since then the initiative has been joined by many other countries from Estonia to Bulgaria, including the Czech Republic. Why is it necessary to boost cooperation on a North-South axis? Is the Three Seas Initiative a recipe for boosting the economies of the “poorer” wing of the European Union? Does it have some political ambitions? In what ways does it build on the work of the interwar concept of the Intermarium? Can it help us when it comes to dealing with the politics of Moscow? How does it fit in with existing international cooperation platforms (Visegrad Group, Central European Initiative)? How do the EU, US, Russia and view the project? What are the geopolitical risks of such a project? How do perceptions of the project differ between Warsaw and Prague?

Speakers will include guests from Poland: the editor-in-chief of the website Trimarium.pl Grzegorz Górny and Central European politics expert Piotr Bajda (Cardinal Stefan Wyszyński University in Warsaw). The Czech side will be represented by the head of the Czech Ministry of Foreign Affairs’ Central Europe Section, Jiří Šitler, and Martin Svarovský from the think tank European Values.

Debate organized by the Václav Havel Library in cooperation with the Polish Institute in Prague.