The Demons and Loves and Films of Pavel Juráček 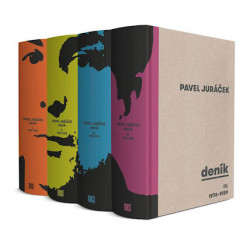 The published diaries of the film director and screenwriter Pavel Juráček are coming out in complete form in four volumes from publishers Torst. The diaries cover the years 1948–1989 and are not just the unique testimony of an extraordinarily stimulating artist but also deliver an invaluable insight into Czech society and cultural life in the 40 years in question. The fourth volume of the diary is from the years 1974–1989, capturing a period when Juráček’s professional life was in pieces, when he didn’t even keep up his diary up systematically and when he lived in West Germany for several years, before in 1983 returning to his homeland to live out the final six years of his life. The volume’s editor and Marie Kratochvílová and Pavel Hájek, an expert on Juráček’s work, will discuss this turbulent, complicated and tragic period of his life.