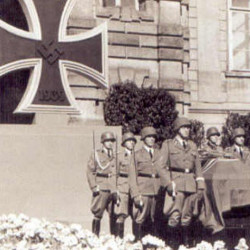 Eighty years ago, in September 1941, following the arrival of Reichsprotektor Reinhard Heydrich in Prague, the first martial law was declared in the Protectorate of Bohemia and Moravia. This so-called first Heydrichiad came in response to the expansion of the resistance movement, the need to ensure uninterrupted arms production and preparations for the Germanisation of Czech territory. Martial courts arbitrarily meted out the death sentence on participants in the domestic resistance, perpetrators of economic crimes and those who breached “public order”; such a verdict was also handed down to Alois Eliáš, prime minister in the first Protectorate government. Historians Jaroslav Čvančara and Eduard Stehlík and publisher and writer Jiří Padevět will discuss the period that preceded the decision to carry out the assassination of the Nazi governor, who had hundreds of death sentences and thousands of arrests to his name but also presented himself as a slick guarantor of social and other benefits to the Czech proletariat.

A series of evenings organised by the Václav Havel Library and the Museum of 20th Century Memory.