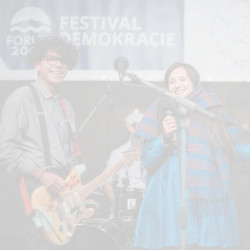 The Festival of Democracy will take its lead in terms of theme from the 24th Forum 2000 conference, which this year will be held purely online under the title “New world on the horizon? How to revive responsibility and solidarity.” Guests in discussions and lectures will focus on finding a path to the renewal of responsibility and solidarity in a radically changing world.

When the Universal Declaration of Human Rights (UDHR) was approved in 1948 the world was rather a different place. Wars lasting several years and the horrors of the Holocaust left their mark on a major part of society. In 2018 we celebrated the 70th anniversary of the approval of the UDHR as well as the 65th anniversary of the existence of the European Convention on Human Rights. Both key documents are undergoing a stress test in the form of a transformation of the political milieu, a rise of illiberal regimes and climate change. Further challenges include digitalisation, artificial intelligence and issues surrounding the right to privacy and free speech in the online sphere. The world is changing – and the democratic systems of the entire world have got to make an adequate and timely response.