On the Romance Novel with Jan Němec and Marta Dzido 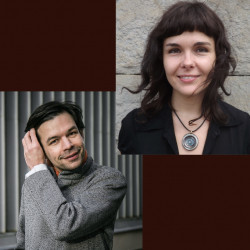 Marta Dzido (1981) is a writer, journalist and director. Her novel Frajda (2018) earned the European Union Prize for Literature and was issued in Czech in 2019 (translation Anna Plasová, Dokořán). Her documentaries Solidarity According to Women and Women Power have also been presented in the Czech Republic.

Jan Němec (1981) is a writer, editor and literary critic who publishes his books in the magazine Host and under the publishing imprint of the same name. His debut novel Dějiny světla (The History of Light) (2013) also received the EU Prize for Literature. The Possibilities of the Romance Novel was published in 2019 and was nominated for the Magnesia Litera prize.

Klára Fleyberková will moderate the evening.

Co-organised as part of the Polish-Czech Literary Autumn by the Czech Literary Centre, Instytut Książki, the Václav Havel Library and Book World.