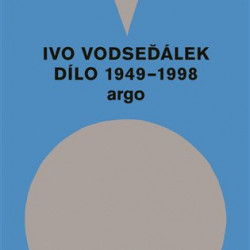 The work of Ivo Vodseďálek (1931–2017) can without hype be described as one of the previously undiscovered treasures of modern Czech literature. The writer is virtually unknown to most readers but enjoys an almost cult status in the literary community. His friends and admirers included such greats of Czech literature as Bohumil Hrabal, Kamil Lhoták, Vladimír Boudník and Egon Bondy, while his legacy has been the focus of literary historians and critics for some time. Dílo 1949–1998 (Works, 1949–1998), a voluminous, 1,100-page volume of Vodseďálek’s selected poetry will be presented by its editor Martin Machovec, author Jáchym Topol, filmmaker Olina Kaufmanová (Vodseďálek’s daughter) and Argo publishing house editor Petr Onufer.

Actor Karel Dobrý will read from the author’s work.

Organised by the Václav Havel Library in cooperation with the Argo publishing house.