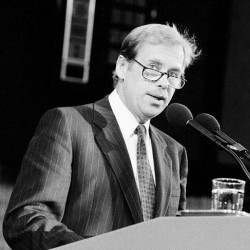 On December 29, 1989 Václav Havel was elected Czechoslovak president, with the playwright president became an icon of the Velvet Revolution. Just four days later, on January 2, 1990 he carried out his first international trip to Germany, where he visited Munich. As a trip, it was an important signal. But how come it took place so soon? What were the intentions behind it? And how did Václav Havel do as a novice in world politics?

The debate will be held in German without interpretation into Czech.

Organised by the Václav Havel Library in cooperation by the Stiftung Literaturhaus and Haus des Deutschen Ostens.