Amputations: Stories from an Undeclared War 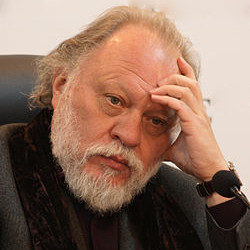 Igor Pomerantsev, a poet, radio dramatist and journalist with the BBC and Radio Free Europe, will introduce a pictorial book by five authors focused on the tragedy of the war in Eastern Ukraine. Amputation is a versatile metaphor for the excising of part of the body, of state territory and also of human consciousness. The heroes of Igor Pomerantsev’s poetry collection Amputace (Amputations) are 12 volunteer soldiers who set off to protect their country and returned from the war without limbs. How to live? To forget or to remember? To reconcile oneself or to fight? As the officer Andrej Skorochod says, losing a leg is forever but losing Crimea or Donbas is not.

The evening will also include a screening of excerpts from the documentary film Amputation (2017) by Igor Pomerantsev and Lýdie Starodubcevá. Other authors of the anthology, Boris Chersonskij and Ljudmila Chersonskaja, will also present their work. Boris Chersonskij’s 2014 collection Missa in tempore belli (Mass in a Time of War) was a response in poetry form to shock at the “amputation” of Crimea and the undeclared war in Donbas.

The Ukrainian poet Ljudmila Chersonskaja also focuses on the Russian-Ukrainian conflict. Czech readers have their first opportunity to become acquainted with her work with a selection from the 2018 collection Vaulting the Ditch. The translator and psychiatrist Džamila Stehlíková will also share her impressions from a trip to Eastern Ukraine in 2014.

Introduced by Michael Žantovský, director of the Václav Havel Library.