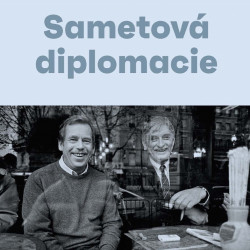 From 11 December 1989 Dana Huňátová served as head of the office of the freshly appointed minister of foreign affairs, Jiří Dienstbier. In a book of memoirs aptly entitled Sametová diplomacie (Velvet Diplomacy) she lifts the lid on Czechoslovak diplomacy between December 1989 and the elections of June 1992, as well as casting light on the roots of a number of political disputes.

The book’s foreword was penned by former foreign minister Jaroslav Šedivý, who will help launch it, while the afterword was written by Madeleine Albright, who was a great admirer of Jiří Dienstbier and Václav Havel.

The evening will be moderated by the book’s editor Irena Tatíčková and writer Marek Toman will read excerpts.