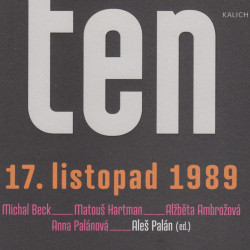 Everybody took to the streets of Prague that day. They just didn’t know yet they had become part of an event that changed our history.

The gathering at Prague’s Albertov, the euphoric march along the embankment and the subsequent violent repression on Národní St. have entered the history books. Ten den – 17. listopad 1989 (That Day – 17 November 1989) is a new book bringing together over 200 eye-witness accounts from experienced demonstrators as well as those who took to the streets for the first time that day, student organisers and rank and file participants, random passers-by and police officers. What was their experience of 17 November and what expectations did it give them? What thoughts did they wake up with that morning and what future did they imagine when the demonstration was broken up and they were counting their cuts and bruises? It isn’t a detachment of actors in those events but the actual day itself that speaks to the reader. The book gives a voice to well-known and unknown attendees, including those who have never previously spoken publicly about their experiences.

The authors, Michal Beck, Matouš Hartman, Alžběta Ambrožová and Anna Palánová, who were still students when the book was being written, have created in cooperation with writer Aleš Palán a compelling collage mapping the story of that unique day. It allows contemporary readers to vicariously experience that crucial date and brings to life the legacy of days of revolution and hard-fought freedom.

Petr Schwarz will moderate an evening featuring both the authors and a number of their interviewees.