Andrej Bán: The Elephant in Zemplín 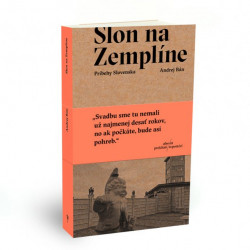 The face of Slovak society changed utterly in 2018. The murders of journalist Ján Kuciak and his fiancée Martina Kušnírová rocked the whole society and connections came to light between the mafia and top politicians. Andrej Bán witnessed all of this at close quarters, just as he did many other important events in Slovakia over the last 30 years.

Bán, a Slovak photographer and reporter mainly focused on war zones, knows his native country like the back of his hand. He has travelled its roads and dusty paths over three decades, during which time he has come to know the Slovak people and their stories. His texts reflect the observant eye of the photographer, while for their part his photographs show the keen eye of an excellent narrator.

The book of reportage Slon na Zemplíně (Elephant in Zemplín), published in Czech on the Absynt imprint this month in a translation by Miroslav Zelinský, is an intimate account of the landscape and people who live their lives way beyond the horizon of general attention. It is a winding journey from east to west, from Čierna nad Tisou to Bratislava, but also a long pilgrimage through time, from Jánošík through Tiso to the ´Ndrangheta and “our people”. Stories include a man who decided to live as one with nature near the village of Sečovce, swindled farmers and the agro-mafia and the Romany man whose torturing to death by the police touches on the Slovak tragedy of the aryanization of Jewish property.

The book is a colourful fresco of tales from the country that is closest to us but also the one we know the least.

Organised in cooperation with the Absynt publishing house on the occasion of the publication of the Czech translation.