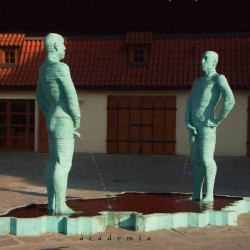 Thirty years have elapsed since the collapse of communism and Soviet-Russian hegemony in Central Europe and also since the renewal of state sovereignty and democracy in Czechoslovakia, respectively the Czech Republic. Currently, however, we are witnessing in the Central European region (and beyond) uncertainty regarding the functioning of liberal democracy, the process of European integration and the development of Western civilisation, despite the fact that the dialogue-based, reflexive and self-critical West remains quite a decent civilisation. These are some of the reasons for the creation of the publication Nesamozřejmý národ? Reflexe českého třicetiletí 1989–2019 (An Uncertain Nation? Reflections on a Czech Thirty Years, 1989–2019), which attempts to examine our present situation critically and to identify important trends.

It will be discussed by its co-authors: historian and philosopher Petr Hlaváček, journalist Jakub Patočka and historian Petr Placák.