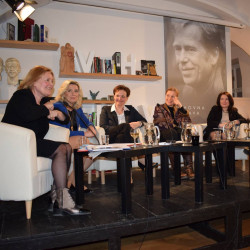 Silent Women in an era of cultural transformation and information warfare.

The Silent Women forum is attempting to build a platform for women searching for answers to the questions of today’s modern era. An era in which all hitherto value concepts are subject to repeated scrutiny and challenge. Our aim is to support women in their efforts to acquire their own voice and vocabulary. Not via radical experiments but through calm, substantive discussion on the role of women in this turbulent period when ancient conflicts between the genders are misused and weaponised in hybrid war and propaganda. We want to lead a meaningful discussion, find paths forward and contribute via a calm, society-wide dialogue to the resolution of the tasks before us on the verge of a new century. The issue of women must not become a battlefield of the culture wars.

Panel I: The Abuse of Socially Sensitive Issues in Hybrid Warfare and Propaganda