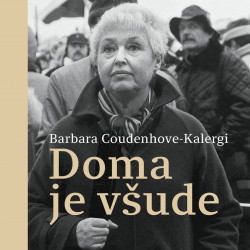 The history of Central Europe in the memoirs of a famous journalist.

Barbara Coudenhove-Kalergi experienced countless key events in the region, including taking part in Pope John Paul II’s first visit to Poland, the establishment of independent unions in Gdansk in 1980, the fall of the Berlin Wall and the military conflicts in the former Yugoslavia. As Central and Eastern Europe correspondent of Austrian TV and radio station ORF she also experienced 1968 and the Velvet Revolution in Czechoslovakia. In 2001 Václav Havel bestowed the Order of T.G. Masaryk on her in recognition of her support for democracy and human rights.

The autobiography Home is Everywhere, which has been issued in Czech by the Vyšehrad publishing house, will be introduced by the author in person.