Media Education in the Czech Republic 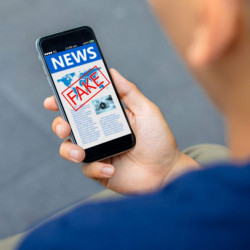 According to a STEM/MARK survey, one-quarter of the Czech population has low media literacy, while half have only medium literacy. At the same time, two-thirds of respondents claimed to possess good orientation in the media. Thanks to media illiteracy, disinformation websites and various populist movements are thriving in the Czech Republic. A sizable portion of the population have difficulties with disinformation, manipulation and orienting themselves in a sea of information. Media education is not taught separately in Czech schools but in a cross-subject manner, most often in Czech and civics, and there is insufficient time for such an important issue. Some surveys also report a lack of materials, teaching aids and teacher training.

Our guests will discuss how to improve media education in the Czech Republic, how teachers are trained at present and how they should be in future, as well as what role formal and informal projects play in this and how hard the Czech government is working to push through changes in education.

Guests: Adam Balling, a student at Charles University’s Faculty of Pedagogy who is already teaching, Michal Kaderka, a teacher and designer of media education materials, journalist Jindřich Šídlo and others.

Organised by the Václav Havel Library in cooperation with Faketicky.