Karel Skalický: The Church in Europe, Europe in the Church 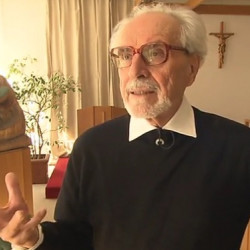 Mons. Karel Skalický is a Czech Roman Catholic theologian, academic, writer, priest, teacher and an emeritus professor at the Pontifical Lateran University and the University of South Bohemia in České Budějovice, where he is based at the Faculty of Theology. An exile in Italy from 1956 to 1994, he has been an editor at the theological review Studie, a spiritual councillor to young people at St. Peter’s Oratory in the Vatican, a spiritual steward to Czech exiles in Italy, the second secretary of Cardinal Josef Beran and the recipient of the Order of Tomáš Garrigue Masaryk. Since his return to his homeland he has been a supporter of the revival of academic theological life.

The author will present his recently published monograph Církev v Evropě, Evropa v církvi (The Church in Europe, Europe in the Church). It offers a theological view of the history of Europe via the prism of freedom and revolution (the Trinity), which reflects European history, particularly the history of the 20th century in Czechoslovakia and in other countries behind the Iron states via key historical turning points: revolutions.

An evening or readings, recollections and dialogues will be hosted by theologians František Štěch and Zdeněk A. Eminger.