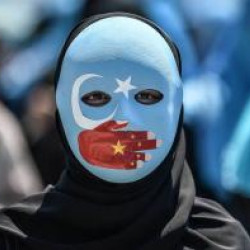 The Xinjiang Uyghur Autonomous Region is, like Tibet, a focal point of ethnic unrest in China. The oases bordering the Taklamakan Desert and the area of steppe in the Dzungarian basin didn’t become part of China until the 18th century. Until recently the Muslim ethnicity, Uyghurs in particular, predominated in Xinjiang. The Chinese Communists took control of the region in 1949, while Xinjiang has been ever more closely integrated with the Chinese state since the launch of reforms 40 years ago. Its mineral wealth and fertile soil have drawn Chinese colonisers to Xinjiang. The repression of the native population has led to constant tensions in the province, which escalated into unrest in Ürümqi in 2009 and a series of violent incidents and terrorist attacks. Since Xi Jinping took office in 2012 the situation of Uyghurs in Xinjiang has rapidly deteriorated.

In a spirit of new normalisation, the Communist Party of China is bringing back totalitarian aspects of Leninist state control. In 2014 the government launched, under the pretext of a “people’s war against terror”, an extensive campaign to tighten control of Uyghur society and to suppress the Uyghurs’ religious and ethnic identity. To achieve this Chen Quanguo, who racked up plenty of experience with the earlier introduction of hard-line rule in Tibet, was appointed in 2016. Chen has created a police state in Xinjiang, employing state-of-the-art technology to control the “defective” population.

The establishment of “political re-education camps”, in which estimates suggest up to a million Uyghurs and other Muslims (roughly 10 percent of the whole population of native ethnic groups) are being held, is alarming. People frequently disappear overnight without a trace and it is unclear if they will ever return. The religious and cultural life of the Uyghurs and other Muslim ethnic groups is subject to ever stricter restrictions, which is having a destructive impact on their identity.

For this reason Czech and Slovak academics launched an open appeal calling on the governments of the Czech Republic, Slovakia and China to shut down re-education camps for Uyghurs and other minorities and to respect of internationally recognised human rights in China. You too can take part in this appeal. The full text is available here: https://bit.ly/2Cjqx61