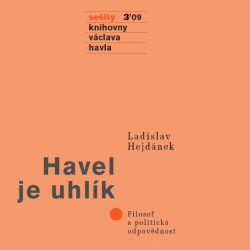 A collection of thoughts on Václav Havel.

Set of critical reflections on Havel’s intellectual work from the pen of a leading Czech philosopher. Many texts are published in a book for the very first time.

"(...) In my younger years with my friends I played a social game of “what would it be if it was” - many people know it, perhaps under another name. In the spirit of the game, certainly a little bit strange question occured to me: what would Václav Havel be if he was a chemical element? It seems to me that surely carbon. Carbon is able, both directly alone and with other elements, to combine into a variety of other combinations and other elements, and of course also always with itself, and is able to create new chemical facts and open chemical possibilities that few anticipated before. It can do it in small and large, combines in a single molecule as well as in very complex molecules: carbon likes to experiment, many compounds fail, some are just poor, and almost definitely good for nothing, while others are full of imagination, surprising features, and even real life. We cannot imagine real life without carbon at all. Moreover, carbon itself has, without other elements, a number of forms that are not similar to each other at the first sight. A chemist, of course, knows the method to verify its identity, but what about a non-expert who sees a graphite and then a diamond, but sometimes even only soot? Havel’s polyvalent creative disposition has long surprised me: for the first time, I clearly realised this over his “Anticodes” in 1965, when he began to cooperate with Tvář. Since the beginning all his work is accompanied by a significant feature, namely, the extremely developed sense of the absurdity. Indeed, there can be seen kinship with carbon and with the development of various forms of living beings as well as their often curious types of cohabitation (...)”

The book is sold at CZK 119 + postage, which is eliminated in case of personal collection.