The Rogues of Horní Počernice 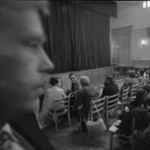 A report on the premiere of Václav Havel’s The Beggars Opera in 1975. Organised by Anna Freimanová.

A collection of recollections, letters, reviews and studies focused on the world premiere of Václav Havel’s The Beggar’s Opera, which took place on 1 November on 40 years ago. Texts by Anna Freimanová, Václav Havel, Andrej Krob, Sergej Machonin, Luboš Pistorius and Jaroslav Vostrý are supplemented and illustrated by period photographs by Bohdan Holomíček.

On Saturday 1 November 1975, in the dark years of normalisation, a number of serious crimes that did not pass without consequence were committed in the hall of the pub U Čelikovských in Horní Počernice. A group of delinquents aged 17 to 25 were not the only ones caught in the net of the StB secret police – so were dozens of recently famous artists and important activists in what was referred to as the Prague Spring. They were forced to undergo police interrogations that for many were the beginning of long years of StB harassment. AK, aged 36, was also interrogated several times, thrown out of his job and barred from carrying out his profession of stage hand on the territory of the then Czechoslovak Socialist Republic until November 1989. The former writer, provocateur and reactionary VH, 39, was revealed to be the mastermind and organiser of the whole event.

What actually happened at that time? From today’s perspective, nothing out of the ordinary:

A dramatist wrote a play. His friends and other friends, who formed an amateur theatrical company, rehearsed it and for their own pleasure and that of the writer performed it once on the stage of a pub on the outskirts of Prague. There were around 200 people in the audience, in the main friends and relatives invited by the author and other participants. The performance went well and was well received. The audience clapped, the actors and writer were handed bouquets of flowers. They all left the hall in an orderly manner and set off for a restaurant in central Prague. There they celebrated a pleasant evening and the fact that – for many after several years – they had met again. Nobody was attacked, nothing was broken or stolen and no actionable statements were uttered. Despite this, the Monday saw the launch of a police operation as intense as if Communism had been overthrown and the security of the state threatened on that Saturday night…