The Persecution of Václav Havel: Letters and Documents, 1968–1989 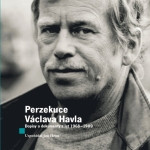 A collection of texts mapping the injustices Václav Havel had to face in the normalisation period.

A collection of texts by and about Václav Havel capturing the persecution that Havel experienced at first hand during the normalisation period. It also captures the fundamental transformation of his life. From a playwright who was occasionally publicly engaged, in the years 1969–1989 he becomes a politically engaged thinker who occasionally writes plays. Well-known essays here sit side-by-side with personal correspondence, interviews, statements and documents. Much of it is being published for the first time ever, including letters from Josef Škvorecký, Pavel Kohout and Jan Vladislav, prison records and more. The renowned historian Jiří Suk places individual chapters in a broader social context.

Václav Havel is primarily known as a dramatist and politician. But our knowledge of him as a civic activist is less substantial and incomplete. We know that he initiated protests against the shackling of culture, wrote declarations and open letters, described life in bureaucracy and repression and stood up for the unjustly prosecuted. But if anything we are just aware of this, without examining or evaluating it more deeply. Havel has up to now interested us as an artist exploring the crisis of values and structures, as a dissident thinker and pro-Western politician of global renown. This collection of letters, interviews, reports, interrogation reports, defense pleas and final summations, some published previously and some for the first time, should show Havel as one who was unafraid and got stuck into an uneven clash with the communist regime – in times of political thaw and retrenchment. It should not present him as a symbol, but rather as a man who forced to undergo a tough test of his mettle.

from preface by Jiří Suk