Instigation and Punishment (VHL Workbooks No 2) 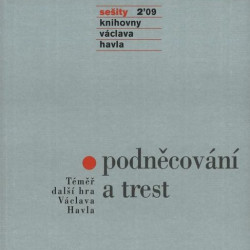 Václav Havel was arrested during the so-called Palach Week in January 1989 and was accused, among other things, of instigation: he mentioned in a certain context on Radio Free Europe the commemoration of Palach’s self-immolation by which, according to the Court, he instigated many Czechoslovakian citizens to come and view the pious prohibited gathering. For this action he was subsequently unconditionally sentenced to eight months’ imprisonment.

The text of the court trial was created in February 1989, thanks to Václav Havel’s sister-in-law, Dagmar Ilkovičová-Havlová, who had made a secret audio recording in the courtroom and rewrote it in the form of a “play” in which the major roles are played by Václav Havel and Judge Helena Hlavatá. The text of “Instigation and Punishment” was prepared for publication in an Expedice edition. Due to the rapid events overtaking it, however, it was then not published.