Václav Havel: Suspicious to Myself 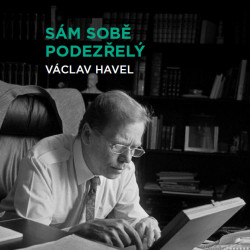 A collection of eight personally toned speeches by Václav Havel from 1990–1995.

The key to selecting the speeches in Václav Havel: Sám sobě podezřelý (Václav Havel: Suspicious to Myself) – Hebrew University honorary doctorate, Salzburg Festival, Anatomy of Hate Conference, Sonning Prize, New York University honorary doctorate, speech to Japanese intellectuals, Medal of Freedom, Future of Hope – is laid out by editor Anna Freimanová in an editorial note: “In the role of president, Václav Havel suddenly finds himself face to face with various temptations of power, feeling a dangerous tension between thought and action. In an atmosphere approaching adoration, he realises how important it is to hang on to one’s common sense. He tries in every way to make his own mark on the post of president, to humanise it, to bring his own personality to it through a certain unconventionality, so signalling that Václav Havel has remained himself and will give up nothing of his past. He has a sense, however, that it is not humanly possible to fulfil this resolution completely. A lifelong inner continuity, linked to responsibility and personal obligation, was always a condition of identity for Václav Havel. He makes that clear in these presidential texts, in which among other things he keeps returning to the Faustian subject of temptation by the devil, a subject he pondered from at least his first imprisonment for making Charter 77 public at the start of 1977. At that time he had begun playing a game with the StB in which, in his view, he did not measure up particularly well. Throughout the rest of his life he returns to this subject, dealing with it anew, always, including as president, coming to the conclusion that he must examine himself, work on himself, and that everything is by and large in his own hands – and by extension in the hands of each of us.”

Two original essays – a foreword by Martin Palouš, a member of the Board of Trustees of the Václav Havel Library, and an afterword by Michael Žantovský, author of a biography of Havel – place Václav Havel’s philosophy in a broader period and cultural-historical context. Photographs by Ondřej Němec complement the text.

With the publication of Václav Havel: Sám sobě podezřelý the Václav Havel Library  marks the 25th anniversary of Václav Havel’s first election as president on 29 December 1989, at the same time building on a student edition of a series of collections of Václav Havel’s works and the titles Moc bezmocných a jiné eseje (The Power of the Powerless and Other Essays) and Evropa jako úkol (Europe as a Task).