Jan Hanč: Events / A facsimile of a handwritten notebook 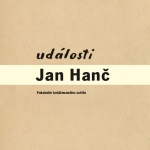 Události / faksimile rukopisného sešitu (Events / A facsimile of a handwritten notebook) is a unique reproduction of a letter-collage-sneer by one of the best known “outsiders” of Czech literature, who – thanks to his unpretentious conception of art – had a significant influence on many writers in the second half of the 20th century.

It is linked to the author’s literary work by means of a regular title, first person narrative and letter format, the existence and necessity of which is often thematised in the notebooks, and overarching passages that imitate magazine editorials. However, that which in other texts evokes an impression of the unmasking of an empirical author – as if attacking the “made-ness” of a literary text and provoking the reader to an exchange of views – is here replaced by the pugnacious stylization of a spokesperson who in part blatantly creates mystification and in part draws the reader’s attention like a fairground barker or a comedian in a cabaret with an overflowing supply of material: ‘When I started in my first job… Perhaps you’re more interested in travel… The time has come when I also have to present myself to you visually… Historic stories are also highly amusing… Before we allow another year into our world, we should sing… I wonder if you also like animals?... Do you like memoirs?... I hope you read the daily papers… It occurs to me that you may have forgotten your defence… So I thought we could perhaps chat about film…’

Although the real Jan Hanč appears in some photographs that the text refers to, and many motifs and opinions are similar to those we know from the handwritten notebooks, what dominates here is a stylized layer of mockery, breaching not only the illusion of identity between the real ‘physical’ writer and the grammatical first person, but also ridiculing the idea of a disciplined citizen of the socialist state that Czechoslovakia was at the turn of the 1950s and 1960s. And while it is the ingenious combination of pictures and their captions that offers parallels in terms of form with Deník 52 (Diary 52) by painter Vladimír Fuka and Pražským deníkem 1938 – 1965 (Prague Diary 1938 – 1965) by photographer Jan Lukas, his deliberately down to earth cheerfulness and wilfully mercurial efforts to attract the interest of listener-readers, respectively reader-listeners, places Hanč closer to the work of the writers around the typed editions of Půlnoc (Midnight) at the start of the 1950s (E. Bondy, I. Vodseďálek, B. Hrabal), in which stoic irony is combined with an enchanted fascination with the realities of Communist propaganda.”