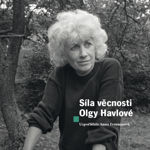 Síla věcnosti Olgy Havlové (Olga Havlová’s Power of Pragmatism) is a collection of reminiscences and interviews published to mark what would have been Olga Havlová’s 80th birthday.

It attempts to form as realistic as possible a portrait of the founder of the Committee of Good Will, the first post-revolution first lady, a respected figure of the dissent and, last but not least, the wife of Václav Havel.

The collection builds on a successful publication within a Respekt series in 2008, though it has been expanded considerably. A letter from Václav Havel, published for the first time, refers to the obstacles and conventions the young couple had to contend with and hints at a rebellion against his family. The core of the book comprises a mosaic of memories and sketches by writers and journalists, supplemented by several new interviews with Olga’s intimates. An important chapter is devoted to the Committee of Good Will, into which she put a great deal of energy. The volume closes with reflections on her activities, within the camaraderie of the dissent, in the Hrobka People’s Cooperative Library; as a joke it focused on pulp literature, put on parody fancy dress social events and “living pictures” with eccentric ideas and was in part a defence against the hopelessness and repression of the Communist regime. Quotations from the samizdat magazine Nový Brak (New Pulp) are supplemented by a number of photographs of Dagmar and Ivan Havel, Jan Kašpar, Kateřina Bajzíková and others, most of which had not previously been published.

The collection was put together by Anna Freimanová.