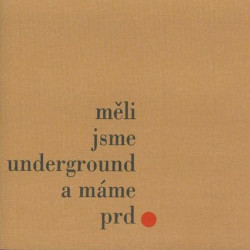 The first issue of the Václav Havel Library Notebooks quarterly was published on 11th March 2009.

It contains a catalogue for the recent exhibition “We had Underground and now we have Zilch”, texts of Czech Underground poets, who in one way or another engaged with Václav Havel, photographs by Bohdan Holomíček, and Martin C. Putna’s Preface, in which, among other things, he writes: “ The concrete historic Underground ended. However, every time and every culture needs its Underground - its community of people who live, think and create “differently”, for the majority of society incomprehensibly, provocatively, impiously and thus question the “obvious” values of a given time and culture. The “Underground” of their time and environment includes the first Christians in the Roman Empire, Yurodivy in Byzantium, the companions of St. Francis in Umbria, Jewish Chasids, cursed poets in Paris and beatniks in San Francisco. Underground is the spiritual insurance of every era not to be choked in fat.”