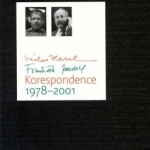 Correspondence between Václav Havel and František Janouch from 1978 to 2001.

The correspondence between Václav Havel and František Janouch represents a unique source of information about the domestic anti-Communist opposition in the years 1977 – 1989. During that period, the Charter 77 movement was formed around Václav Havel and other Czechoslovak dissidents. Among those who backed and provided material support to them from abroad was the Czech exile František Janouch, a nuclear physicist who in 1978 founded the Charter 77 Foundation and from that time served as its chairman. The letters, which travelled in the most varied of manners between Prague or Hrádeček and Stockholm or Björknäs, capture not only the beginning of the personal relationship between the two correspondents and their mutual comradely and creative support but also the practical dimensions of that support: administrative matters, work instructions, the mediation of contacts, purchases of technical equipment (computers, video cameras, tape recorders, digital radios) forbidden to the persecuted in their socialist homeland, or financial support. The over 210 documents gathered include all known correspondence until 1989. An appendix contains several letters from the post-1989 period documenting both the social (and personal) changes that took place over the following 16 years in our country. The documents, which are a small history of Charter 77 and in the case of Václav Havel (after his Letters to Olga, 1985) another cohesive publication of his letters, show the technical transformation of everyday work and access to information in the second half of the 20th century; there are many kinds of documents, from handwritten letters to those written on a typewriter or computer to faxes and emails. The basis for the publication is the archive (today, incidentally, also in electronic form) of František Janouch, who edited the book and supplied its foreword.

A collection composed of Václav Havel’s key essays (Open Letter to Gustáv Husák, The Power of the Powerless, Erasmus Prize Acceptance Speech, Stories and Totalitarianism, A Word About Words). Introductions by Martin Palouš and Daniel Kroupa outline the cultural-historical circumstances in which the texts originated. The book is supplemented by photographs, a biography of Václav Havel and a select bibliography and is intended for young readers.

These six prose pieces of various lengths and tones by Zdeněk Urbánek (1917 – 2008) recall girlfriends, friends, relatives and others less close among whom Urbánek, a prose writer, critic, essayist and translator from English, lived. The author presents not only captivating portraits of some family members, artist friends and war heroes; he also depicts strangely warped characters such as Václav Řezáč and Zdeněk Nejedlý. And all of this by means of language and composition that are expansive and perhaps complicated but never without purpose; Václav Havel wrote of his style that “we immediately recognise it”.