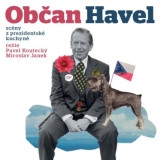 An epic documentary by Pavel Koutecký and Miroslav Janek following the life of Václav Havel between 1992 and 2003.

In the course of 13 years the crew has filmed 45 hours of images and recorded 90 hours of sound material. This truly unique material offers new looks behind the scenes of international politics in the late twentieth and early twenty-first century, and also into events in a post-totalitarian country during its transition to democracy.

Václav Havel was a key figure in the great changes that took place in central and Eastern Europe in the 1990s – the film material captures his work and influence both in his country and internationally.

Among the truly unique events captured on film is Bill Clinton’s State visit to the Czech Republic in January 1994, including the private part of the visit, when he went to the Reduta jazz club in Prague. Other events are the death of Havel’s wife Olga and her funeral in January 1996, the celebration of his 60th birthday in the Archa Theatre, Prague, in October 1996, the forming of the new governments after the elections of 1996, 1998, and 2002, and the preparations for, and course of, the historic 2002 NATO Summit in Prague. Václav Havel formulating his position for a statement during the Prague meeting of the International Monetary Fund: I sympathize with opponents of the IMF, and I’m also anti-establishment, but now I represent the country hosting the meeting. Václav Havel picks up his first retirement check at the post office.