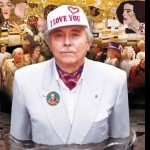 A film that isn't only about leaving high politics, shot by Václav Havel and based on his stage play of the same title.

Except for a few scenes, the entire film is set in the garden of a large government villa, the residence of the main hero, the politician Rieger. He is a dapper, elderly man, who held the office of Chancellor for many years, but has recently been ousted and is apparently unable to come to terms with the fact. Although he tries to hide it, his world has collapsed. He is obliged to move out of the government villa and undergo the humiliating process of separating government-issue property from his own private things.

Sharing the villa with Rieger are his girlfriend of many years Irena, her friend Monika, his mother, his young daughter Zuzana and a butler. Rieger’s Secretary Hanuš and his Secretary Viktor are sorting things out. Rieger receives two visits at the villa from the journalist Jack and his photographer Bob, who conduct a lengthy interview with him. He receives two visits from his elder daughter Vlasta and her husband Albín.

Several other marginal characters come and go. In the course of the film they all change slightly: a lick-spittle turns into a traitor, a bureaucrat turns out to be the only one to remain loyal; the elder daughter, who originally offered to put Rieger up, finally lets him down too and refuses to offer him accommodation. The gardener, a totally neutral figure, is the only link with the outside world, about which he brings fresh news.

Rieger strives to preserves his dignity, but eventually he goes slightly insane, and then later, after undergoing a police interrogation regarding a case of blackmail, he meekly accepts the post of of advisor to the advisor of his main opponent, which he justifies to himself very rationally and which signifies his final fall. The victor is his deputy Klein, a cynical representative of the younger generation of politicians, who pay lip service to the same democratic ideals as Rieger, but in practice clearly ignore them. It turns out that he has purchased the government villa at a favourable price from the state and has plans to turn it into a major “social and cultural centre”.

Rieger also receives a visit from an admirer, a student Bea, whom he eventually kisses, but is caught in the act by his long-term girlfriend. This female student turns out to be very flexible, because at the end of the film she comes to see Klein with the same request she had previously made to Rieger – for him to autograph a copy of his book.

Although the film is based on the stage-play of the same name, it has its own unique atmosphere.