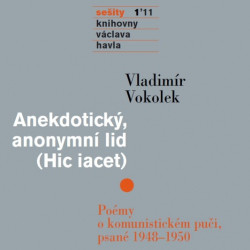 In all probability the first immediate poetic reflection of the Communist Putsch and the consequent life in lies.

Vladimír Vokolek is usually considered a spiritual poet. However, his life and work rather happened “in seclusions” than “in line”. Contrary to most others, spiritual poets perceived the coming of communist power as a national and ethical catastrophe, see Zahradníček’s Sign of Power. Even among them, Vladimír Vokolek was the only one who in his poems (February, Requiem for Jan Masaryk; Kaspar Hauser) with the original synoptic title Hic iacet took inspiration directly in the February Putsch and subsequent liquidation of inconvenient persons – in particular Jan Masaryk and archbishop Josef Beran. Kaspar Hauser, the hero of a German legend, man without past and without future, is here a metaphor of this impersonal presence of “anecdotal anonymous nation”.