From April to the Velvet Revolution 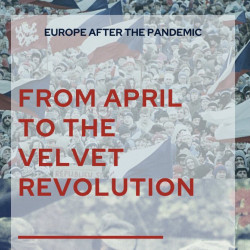 The program, organized under the auspices of the Ambassador of Portugal to the Czech Republic, H.E. Luís de Almeida Sampaio together with the Václav Havel Library, will be streamed in English on The Havel Channel as a part of a series of events on the occasion of the Portuguese presidency of the Council of the European Union.

18.00-18.15 Welcome and opening remarks
· H.E. Luís de Almeida Sampaio, Ambassador of Portugal to the Czech Republic
· Michael Žantovský, Executive Director, Vaclav Havel Library
18.15-19.15 Panel I – Revolutions Then and Now
· José Pedro Aguiar-Branco, former Minister of Defence of Portugal
· Álvaro Beleza, SEDES’ president
· Monika Pajerová, lecturer in the Centre for International Education and Exchange, Charles University
. Jan Farský, MP - STAN political party (Mayors and Independents)
Moderator: H.E. Luís de Almeida Sampaio, Ambassador of Portugal to the Czech Republic
19.30-20.30 Panel II – The Shape of the Post-pandemic Future
· Tomáš Sedláček, Chief Macroeconomic Strategist at the Československá obchodní banka
· Lenka Zlamalova, Czech publicist and economist
· José Manuel Fernandes, publisher of Observador
· Jaime Nogueira Pinto, Professor, Institute of Political and Social Sciences, Lisbon University
Moderator: Michael Žantovský, Executive Director, Vaclav Havel Library
In 1974, the authoritarian dictatorship in Portugal was overthrown after almost fifty year in what became known as the April or the Carnation revolution. Fifteen years later the communist dictatorship in Czechoslovakia was overthrown after fifty years of totalitarian rule in what became known as the Velvet Revolution. The two revolutions came together in December 1989, when a group of Portuguese students and politicians, some of them veterans of the April revolution, came to Prague to voice their support for the revolutionaries in Czechoslovakia, followed by the lightning visit of President Soares and his meeting with Václav Havel, the first between a Western head of state and the new Czechoslovak leader.
More than 30 years later, the two countries are closely linked through their excellent bilateral relationship and their membership in NATO and the European Union, over whose Council Portugal presides in the first half of 2021. They are also facing together unprecedented challenges brought
about by the Covid-19 pandemic and the ensuing economic and social crises. Even in these challenging times, the meeting between the direct witnesses of the two revolutions, politicians of today and public intellectuals of both countries provides an opportunity to talk about the past, the present and the future and help pave the way for a close cooperation, both all- European and bilateral, in overcoming the challenges and getting ready for the scientific, technological, cultural and social revolutions of the future.